Six Guns Straight From Hell was a western horror anthology first published by Science Fiction Trails in 2010.  A second volume came out in 2014. We’re going to bring a third volume in late 2020. The project is being edited by David B. Riley and J. A. Campbell. We are looking for original western horror.  Look at the title. Scare us or shoot somebody. Better yet, do some of both.  We’re not requiring gunplay, but it would help.  The preference will be for active stories. Any type of horror is okay, including dark fantasy, although we’re not fans of excessive sex or gore.  Have some sense of danger or peril.  Unlikely heroes or villains are especially wanted.  Above all else, give us a flavor of the Wild West along with whatever supernatural elements you bring to the table.

Stories should take place in the western United States between 1850 and 1900. This can include western Canada and northern Mexico. Preferred length is 1k to 5k words, although we will accept stories to 8k words.

We tend to see too many sheriff stories. There were plenty of other people out west, including merchants, photographers, reporters, ranchers, Indians, miners, soldiers, telegraph operators, saloon keepers and prostitutes. We encourage stories involving these folks.  If you do feel the need for a lawman, make that person interesting—not simply a walking badge.

Over the years, we’ve noticed some common mistakes a lot of writers make.  We thought we’d mention a few of them. Ships. The names of ships are italicized.  Yep, they are. A lot of folks don’t seem to realize this. Short stories: Titles of short stories are not underlined. They should be put in quotation marks.  Names of plays and books should be italicized, not put in quotes. Few western towns were policed by sheriffs. Incorporated towns in most states are responsible for their own law enforcement and the officials in the western states are usually called town marshals for smaller towns.  Larger cities used the term police, even in the 1800s. (Some eastern states use terms like constable). United States marshals, even back in the 1800s, are primarily responsible for arresting and  transporting federal fugitives, or transporting federal prisoners. They do not deal in routine criminal matters. The Army has its own law enforcement people. They are under the command of an official at a fort or base called a provost marshal. Five card draw poker was not commonly played in the 1800's, though it probably did exist. Stud poker and faro (which is played against a dealer) were the dominant card games. Bourbon is a specific type of whisky that comes only from Kentucky. While a lot of distilled whiskies and such existed in the west, Bourbon was very rare outside major towns like San Francisco or Denver

If you are writing using a pen name you should disclose who you are on the manuscript–who you really are, as well as the pen name. Misrepresenting yourself as somebody else may be interpreted as fraud.  Payment will be royalties against a $25 advance plus two print copies of the book. All terms by written contract.  We are seeking original stories and are not interested in reprints for this project.  The book will be published in both print and ebook formats.

Submit as an attached file. We prefer RTF or WordPerfect formats. We will accept Word. Please include a word count. Email: sixguntales@gmail.com
Before you submit, look over your submission. Have you included full contact info on the first page of the manuscript? That means name, address, email & phone #. Does your manuscript have a word count?  If using an attached file, is the file name similar to the story name?  At the end of your story, did you include the words “The End” or something similar so the editor is certain he has the entire story? If you want italic use italic. If you want bold face use boldface, do not underline. Underlining to get italic goes back to the days when writers used typewriters and compositors actually set type. Those days are mostly over and it’s an antiquated habit. We prefer Times New Roman in 12 point type.

We still see too many writers who think their computer is a typewriter. Use the features like autoindent and page numbering and stop using the tab button to indent paragraphs. This practice is not only antiquated, but makes reformatting and editing difficult. Also, avoid embedding unusual formats or fonts. There is no need to make your manuscript look cute. Simple, plain files. Deadline for this project is –June 30, 2020. Email the editor, David B. Riley, at the above address if you have any questions.


READING VERY SELECTIVELY AT THIS POINT FOLLOWING RECORD SUBMISSIONS. CHANCES ARE BETTER WITH SHORTER WORKS UNDER 3K WORDS.
Posted by David B. Riley at 9:15 PM 1 comment:

The year is 1881 or so, the gold mine has played out, but there’s talk some company from back east is  supposedly putting in a zinc mine near town.

Folks are friendly in Dry Gulch. Don’t forget to stop by the bakery for a loaf of sourdough bread from Miss Wendy’s secret recipe, then wet your whistle in the saloon next door.  Just be sure to tip that piano player. You can get your prospecting supplies from the Dry Goods Store. And you can catch up on Mrs. Duncan’s cat in the pages of the  Gazette. Keep an eye out for Henry, the town drunk. He likes to tell folks about the ghosts he sees, if you buy him a drink.

Dry Gulch is easy to get to.  Just saddle up and take a ride out to the weird, weird west.  Edited by David B. Riley with stories from Sam Knight, Henry Ram, J. A. Campbell, Patrick Dorn, Jill Hand & more. 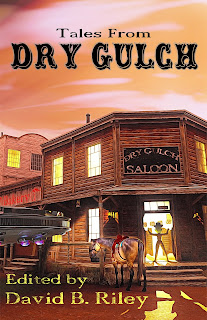